Love and Information by Caryl Churchill directed by Michael Place 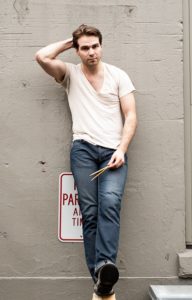 Michael has recently appeared the feature film ECCO and in a international commercial for Amazon Alexa. Acting credits include: Nero in The Octavia by Anne Washburn, The Mechanics of Love (Drama League) Clybourne Park (Cincinnati Playhouse), Children’s Hour, John Baxter is a Switch Hitter, Romeo and Juliet, Hedda Gabler, Miracle! (Intiman Theatre), The Ocean All Around Us (Portland Center Stage), Myra’s War, The Water Station, Suite for Strangers (Pacific Performance Project/East), The Outsiders, The Neverending Story (Seattle Children’s Theatre), Romeo and Juliet, Merchant of Venice, Much Ado About Nothing (Seattle Shakespeare Company), Bud, Not Buddy (Book-It Repertory Theatre), Madama Butterfly (Opera Omaha) and ten productions with Washington Ensemble Theatre where he was a founding co-artistic director and where he directed The Mistakes Madeline Made and Bengal Tiger at the Baghdad Zoo. Other directing credits include Love and Information, Achilles in Sparta, and O Beautiful at Cornish College of the Arts, Mary Poppins at the Moore Theatre, Woman at the Well at the Here Arts Center, Rey Planta and Radio Station at Yale Cabaret, and Dirty a co-production with ACT & WET.

The associate artistic director for P3/East, Michael has trained in Suzuki Method and Ohta’s Slow Tempo for nearly 20 years with master teachers Robyn Hunt and Steve Pearson. He has taught the P3/East Methodology at Cincinnati Playhouse, Portland Center Stage, South Carolina University,  Seattle Repertory Theatre, University of Washington, Yale University, Cornish College of the Arts, Chez Bushwick, Maggie Flanigan Studios in Manhattan, was the co-director of the Seattle Children’s Theater’s YAI program and is on faculty with the Cornish College of the Arts, Seattle Film Institute, Lakeside School and will teach at Seattle University this spring.

Michael is also the founding creative producer of One Coast Collaboration, now in collaboration with ACT Theatre on the ACTONE Festival, an annual new play lab connecting national playwrights with Seattle based theatre companies and was co-artistic director of Yale Cabaret (44). Michael holds a BA from the University of Washington and an MFA from the Yale School of Drama where he was the recipient of the Oliver Thorndike Acting Award.